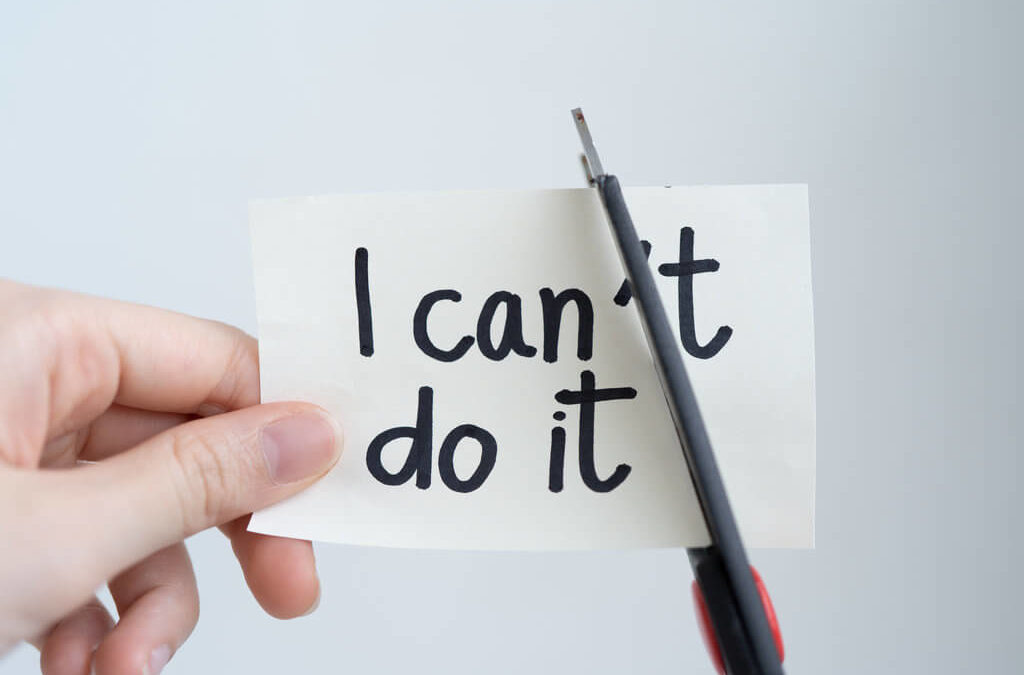 Self limiting beliefs are beliefs that you hold about yourself, others and the world, that constrain you or hold you back in some way. They prevent you from thriving because you operate ‘below the line’ of your potential. Throughout life, we pick up limitations, without even realising it.

Particularly growing up and at school we hold on tight to beliefs we develop. It may only take one teacher to say ‘You are no good at maths’ for us to spend a lifetime believing that to be true, and as we grow up, we avoid any career that involves maths.

Our parents friends teachers and colleagues tell us stuff which we believe to be true, and then we live out our lives constrained by those limitations. We move through life, creating experiences that match our beliefs about ourself. We even seek evidence to prove our beliefs are correct! We filter out evidence that is to the contrary. We avoid anything that might challenge our beliefs, and trundle through life adhering to the limits we have set ourself, and to the beliefs we hold (without even realising it)

‘You are a follower, not a leader.”

‘He is too smart to want to go out with you.”

‘You are socially awkward.”

These are all things we might hear, that inadvertently set limitations on what we choose to do with our lives. This is also another reason why its so important to make the right first impression on others, because once someone has formed a judgement or opinion about you, it can be very hard to shake their beliefs.

You have learned about yourself from various sources over the years; tests you took, comments you got from teachers, what your parents said to you, and how your colleagues, bosses and peers treated you. And there’s a good chance you developed some pretty inaccurate self-limiting beliefs along the way.

So, take some time to consider which beliefs might be limiting your potential. Perhaps you are smarter than think?  Is there a chance you are more capable than you give yourself credit for? Is it possible you are stronger than you know?

I heard something on the radio a while back that clearly shows how self limiting beliefs work in reality. Do you remember Nadiya Hussein – she won Great British Bake Off in 2015.  She was being interviewed just after her win and I happened to be listening to the radio. Turns out Nadiya taught herself to cook from books and You Tube videos – her mum had never been a baker, in fact she used the oven for storage.  Nadiya was housewife in Leeds, and lived with her husband and their children, and they all loved her cooking and baking.  In fact her husband rated her baking so highly that he secretly entered her into Bake Off and much to their surprise she was shortlisted …and very reluctantly appeared on the show – nervous and anxious.

The show pushed her to bake things beyond what she thought was her capability. She entered new baking territory.  The bakes got increasingly challenging and she inevitably waited to be voted out of the tent each week.  But instead of screwing it all up, Nadiya actually rose the the challenges and started to  triumph week after week.  The judges crowned her the Bake Off Champ after ten weeks of baking mastery.

The interview I heard on the radio went something like this ….

“So Nadiya how do you feel?” She responded “I just can’t believe it. I will never set limits for myself again.’

Had it not been for the Bake Off Nadiya would never have discovered quite how good a baker she is. The show pushed her into very uncomfortable places,  places she thought she would very or could never  go. But she went there, because she had to, that’s the rules of the show!

She had held self limiting beliefs that she was Ok but nothing special, that she wasn’t capable of baking mastery. Had her husband not entered her secretly, she, and we, would never have discovered what she is capable of. What a waste that would have been. Nadiya would probably agree that her self limiting beliefs actually felt like ‘facts’ to her .

So what self limiting beliefs do you hold? Think hard about what you believe to be true about yourself, your life and the world around you. Write a list, write them down.

“I am no good at selling”

“I’ll never be a leader”

When you write them down, reflect on them, read them aloud, despite however real these beliefs you hold may feel, be aware that these beliefs are just that, they are beliefs,  they are not truths. Now let your imagination run wild with thoughts / beliefs,  that line up with what you want.

‘I will never have money’ could turn into “I may have been reckless with money in the past, but I have learnt so much that I can handle now my finances carefully and sensibly”.

Now you need to move beyond just saying it but behaving and acting as if the new helpful, useful thought/belief is true. This may feel silly or , but do it regardless. In other words, if you really are beautiful and charming, how would you act at parties? Who might you ask out?

If you really are capable and have learned a tremendous amount from past financial difficulties, what steps would you take now?   If you really are the kind of person who eats healthy food, what will you put in your shopping trolley?

A word of warning: if you avoid taking any steps based on your new belief, you will just keep feeding your old limiting belief.  It will be a self perpetuating loop.

So you must take action, even the smallest step, to solidify or embed your new un-limiting belief or decision.  Your first steps don’t have to be large or perfect, they just need to be headed in the right direction.  Before you can change the beliefs you hold about yourself and the world , you have to be open to the possibility that those things you believed to be true for all these years might not actually be 100% accurate.

Create a new set of beliefs that are helpful, useful and take you in the direction you want to go in (not the direction others think you should or could go in)

Evelyn Waugh wrote, “When we argue for our limitations, we get to keep them.” You choose.